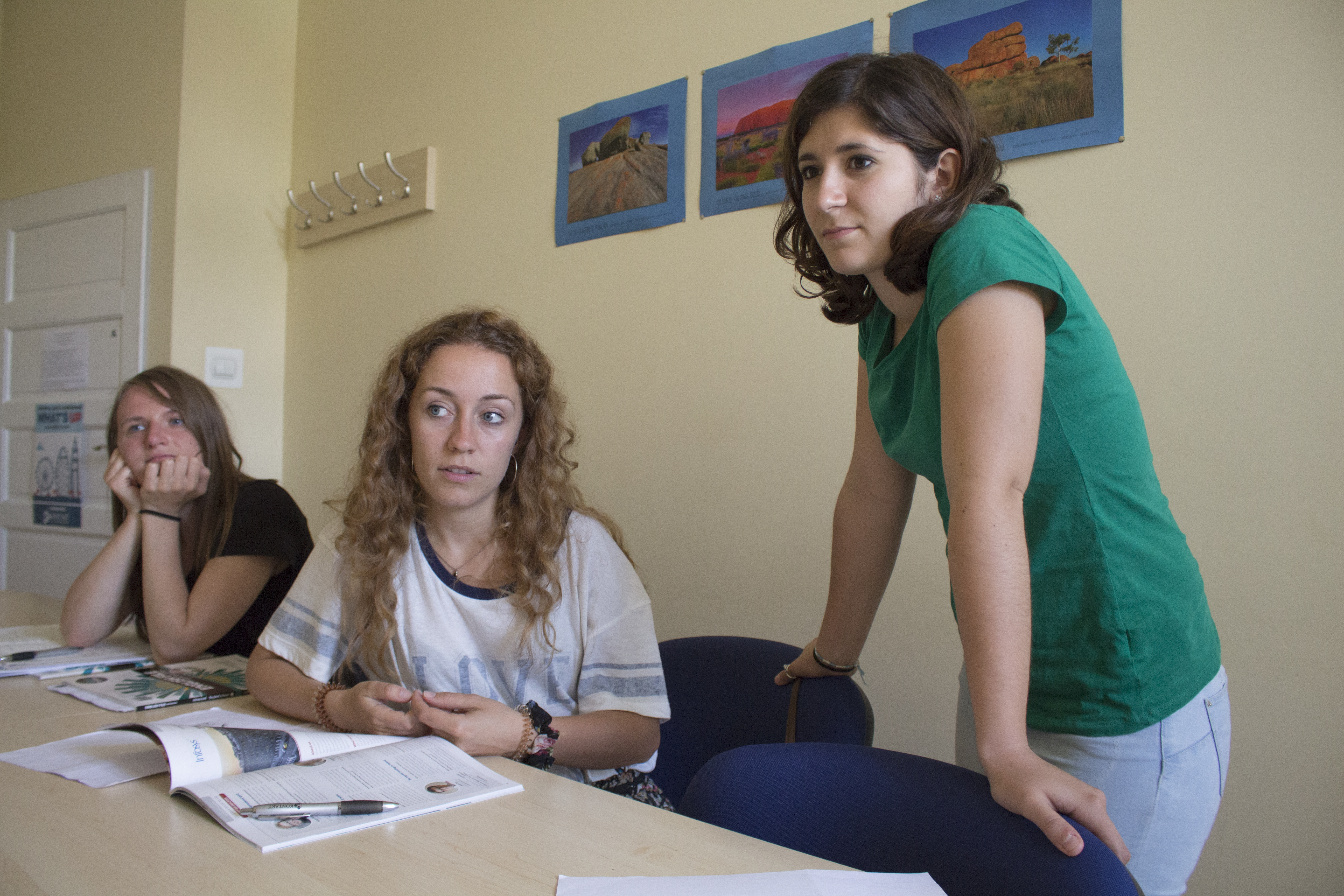 As I enter Kasia and Marek’s office to begin the interview on my last day of work, a glance out of the window makes me notice that it’s raining on Plac Bernandyński. Polish weather has been ruthless with me during my three-month internship in Kontakt, but nonetheless the colorful rooms of this language school soothed the nostalgia about Mediterranean sun, typical of an Italian girl living abroad.

CJO Kontakt has its 26 classrooms in a yellow building of the 1900s, a few steps away from Park Chopina, and shows with pride its international context in the flags sticking out beneath its windows. In perfect harmony with the lively-painted small houses in Stary Rynek, not only its corridors but also every single classroom display a wide range of colours in the most uncommon shapes. If you were to have a treasure hunt around Kontakt, you’d discover a different mosaic in each room. «It was entertaining to decorate and to furnish the school when we bought these apartments», relates Kasia. «We had this idea with our friend Isa, who was an interior designer. We wanted our students to feel like home, to give a cosy and colorful impression. An alternative to the dull shades people usually associate with higher education». In some cases, even the curtains’ patterns match the decoration on the walls, and it amazes me to find out they were part of a plan to improve acoustics during teaching hours: «We had to deal with very long classrooms characterized by a disturbing echo. Using cotton curtains helped in reducing this physical phenomenon, in addition to giving a homely feeling».

Just as different-shaped tiles form altogether a wonderful and colorful mosaic, students and staff from all over the world contribute to the unique and irreplaceable vibe which one may feel in Kontakt. In the last week of my traineeship, the interns’ team has reached a quite impressive international level: students from France, Italy, Germany, Portugal and Zambia cooperate in the backstage to give their best in this experience and to make the language school a very special place. This is precisely what Kasia considers a fundamental feature for Plac Bernandyński’s language school: «The international environment is something I couldn’t really do without. Teachers and students from different countries make you understand and learn a lot about diverse perceptions of the same situation, especially when it comes to time and punctuality! To work in such a context is definetely stimulating.»

No bed of roses though, since Kasia and Marek also experienced many ups and downs throughout the years which witnessed the growth of Kontakt as a very important linguistic centre in Poznań. It was August, 2000, both of them were graduating from universities; Kasia was focusing on the end of her career in languages and Marek was writing his thesis about quality management in language schools, then the idea came: «We chose the name of the school looking for a word which could be understood in several languages… and of course which didn’t include any Polish letters, since they’re so difficult to write and pronounce!» Their project consisted in creating an educational centre in which different languages could be taught, offering a unique product on the competitive Poznań market. Starting up wasn’t easy: Kasia and Marek’s house became the first Kontakt office, classrooms were rented everywhere around the city, in different schools and buildings, and were used only for short teaching hours. It took many years to be completely independent, but the first step was taken in 2004, when they moved to Plac Bernandyński and laid the basis for CJO as we know it today. «A great achievement was doubtlessly becoming an open ETS TOEIC centre: o we were allowed to give anybody the chance to enrol for examinations, so that the access is free not only to our students but also to everyone who wants to try.» In 2013, Kontakt entered the Erasmus+ programme, which opened the school to interns from EU and with them, to new impulses; then, in 2015 it was selected for an Erasmus+ grant, together with other 12 schools in Poland: 25 CJO employees left for Spain and Malta to take part in a two-year training project, which prompted their professional and personal growth. Since that time Erasmus+ or PO WER grants have been realised regularly in different countries.

It’s hard to sum up the multiple aspects of such experiences in just three words, but Kasia gives in gladly to my request: «If I had to choose 3 words to describe Kontakt, they would probably be Atmosphere, Flexibility and Culture. We’ve always striven for a friendly and cosy place, in which our students could feel comfortable and at ease. We like to meet our customers’ needs without being too strict, and we want to give chances to everyone, even when it wouldn’t result in a concrete profit. Last but not least, we are strongly convinced that a cultural approach (including workshops, presentations, and interactions with native speakers) is the first and best way to be in touch with a language: you must feel it if you want to learn it!»

Aussie is sleeping in his kennel under the desk covered with papers, letters and highlighters, and I wonder if he’s able to hear me when I ask Kasia about his role in the school: «He’s PR and marketing director!», she chuckles, tongue in cheek. «People are glad to see him everyday, sometimes some students just come over to say hello to our labrador. I believe he spreads cheerfulness around». Marek appears on the door when the interview is almost over, but he’s on time to confirm: «Aussie sweetens the heart of everyone.» Marek’s probably the tallest person I’ve met in my whole life, and a rather good laugh when he has to pull my leg, giving me wrong information just a few minutes before the working hours. This is why I turn to him to learn more about the funniest moments in Kontakt’s history: «There are so many it’s impossible to remember, but if anybody wants to know, they should ask Gerard. He experienced the most.» Then he mentions an English course for children and a misunderstanding in which the English word “ham” and the Polish “cham” were involved, but that’s another story.

Nowadays an average of 60 staff members, including interns, teachers, PRs and secretary operators, work in Kontakt every day, and the language courses are attended by approximately 2000 students a year. English, German, Spanish, Portuguese, Italian, French, Russian, and of course, Polish, are taught and spoken daily in this colorful, joyful and welcoming environment, which makes both the experience of teaching and learning unique and enjoyable.

On my last day of work it’s still raining over Poznań, but in the end it doesn’t even matter. Truth has it, some wonderful, joyful and irreplaceable people have made my moments in Kontakt one of the best experiences of my life, and they have taught me that colours shine not only through decorative mosaics on the walls of a place, but also and especially through the attitude of every single person which is ready to share something with you.

P.S.: a special thanks goes to Agata (PR), a Polish mom to me; to Olympia, a very brave and hardworking French Philology student; to Agata (secretary), for her patience, constance and availability; to Gerard, for his unbelievable madness; to Marta, for being a true friend in times of trouble; to Ola, the coolest Erasmus coordinator ever; to Aussie, for making my day, constantly trying to steal my food; and to all my beloved interns, no need to write your names, you already know it!

Autor: Cristina Iorno, the Italian intern at KONTAKT in 2017/ blog.cjo.pl